Speeding and red-light running are two of the most frequent traffic offenses, increasing the risk of severe accidents and casualties immensely. When speeding, drivers have not only longer braking distances but also less time to notice dangers and to react appropriately. Another scenario where drivers often miscalculate the risks is when running over a red light at a signalized intersection. Due to cross traffic, red-light running impedes a high crash potential. Right-angle crashes are particularly critical and often result in severe injuries.

Enforcing applicable speed limits and red-light running is considered the most effective tool for changing dangerous driving behavior and improving safety. The best way to detect violations is the use of specialized monitoring systems. A key component for such enforcement systems is advanced radar technology from smartmicro, which precisely measures the position and velocity vectors of all vehicles within their field of view in real-time. smartmicro technology enables builtin double redundant speed measurement with direct, very precise Doppler and range rate measurement. Compared to other technology such as lidars, smartmicro radars deliver precise measurement in 4D, the four dimensions being: true speed, direct range, as well as direct azimuth (horizontal) and elevation (vertical) angle. Even the acceleration of vehicles can be calculated accurately. Multiple independent receiving antennas enable the highest measurement quality and capture rate and provide additional redundancy, making the sensors ideal for various enforcement applications. 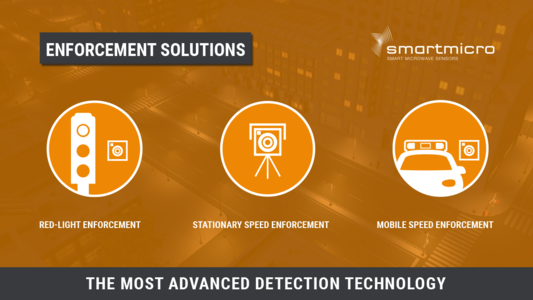 In inter-urban areas, for example, smartmicro sensors are used for the measurement of pervehicle speed on highways from a permanent stationary location.

In urban areas, permanently installed enforcement solutions are often preferred to control slowspeed limit areas, such as school zones. At signalized intersections, it is necessary to discourage red-light running on a regular basis to raise awareness of the offense itself as well as the consequences it may have. For best-in-class red-light enforcement smartmicro’s multi-lane, multiobject tracking sensors cover up to 10 lanes and track up to 256 objects simultaneously in a wide 100-degree field of view. Since the sensors provide high performance even at short distances, they can be installed behind or in front of the stop bar to detect both approaching and receding traffic. Additionally, the integrated Event Trigger Module allows for multiple, customizable trigger lines inside the field of view and for combining them with defined events or trigger signals by the overall enforcement solution. This way, smartmicro sensors are ready for easy integration into customer solutions and can be perfectly adjusted to the individual needs of the traffic situation. The available setup tools, like the simple and intuitive smartmicro Traffic UI software, as well as the hand-held target (speed) simulator for in-field testing and regular re-certification, make the installation and alignment of the sensors even easier. For simple integration into customer systems, an application programming interface (API) is provided.

Moreover, smartmicro’s radar sensors can be easily integrated into police cars for mobile speed enforcement. In this application, the sensors are ideal for speed, tailgating, and other types of enforcement while driving. The sensor can measure the speed of multiple vehicles driving on three or more lanes simultaneously, both in front of and behind a car. Further, it is possible to use the system at any time - while driving or parked alongside the road. The sensor measures the ego speed of the police car itself with high accuracy – this being independently tested by the Swiss Federal Office of Metrology and Accreditation (METAS) – plus the positions and speed vectors of the vehicles all around.

Due to the small form factor, the smartmicro sensor can be easily integrated into different enforcement systems, no matter if stationary, portable, or mobile enforcement solutions. With its flexible measurement and trigger distance, the sensors can be easily adjusted to different measurement scenarios. The sensors cover up to eight lanes and maximize the number of reported offenses. They provide a long detection range and large speed interval, allowing maximum flexibility. smartmicro enforcement sensors are available for 24 GHz and 77 GHz frequency bands.

Research1 shows that penalties for exceeding the speed limit or red-light running not only have a positive impact on the individual's driving behavior. As the average speed and the behavior of other traffic participants significantly influence the attitude of other drivers, the presence of traffic enforcement measures has a proven "snowball effect". The more drivers comply with the regulations, the more the overall morale changes in favor of considerate and safe driving. In total, such enforcement measures aim to encourage adherence to safety-relevant regulations, which, in turn, minimizes dangerous driving behavior and has a major impact on road safety. Additionally, enforcement measures have a positive side effect on living in zones around the roadways – for example, by avoiding noise pollution – as well as the travel times by improving traffic flow.

smartmicro technology contributes strongly to the many possible traffic enforcement applications and helps increase safety for all traffic participants.